On the weekend I decided that I needed to try my hand at some Still Life, partly for the fun of it and partly for an upcoming challenge. So basically I set up my portable studio in the garage, took in some props and played with lighting and various different effects with the camera. I took some actual still life, such as the coffee and the wine shot and then thought I’d have a go at capturing some liquid. I also tried to capture steam from the coffee…….but that was a total disaster. In Fact all I got were shots of my coffee cup! (Hence no shots here) I know the theory; steam only shows up in front of a black background. Perhaps I did not have enough light? Need to try that again. 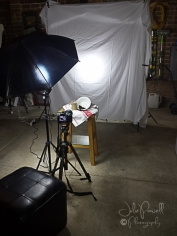 I had watched this really cool video on capturing a liquid pour into a glass and thought I would try it, I made a bit of a mess, but I thought it wasn’t bad for a first effort.

Also I used a plastic cup and not glass (just as well it got dropped a few times 🙂 ) that may have made the shot a little murky, a nice clean crystal glass would probably make a nicer shot, also I can find some red food dye, blue is quite nice but a little fake, come to mention it; the apple and blackcurrant juice in the wine glass also looks a little fake too, isn’t red wine a little more opaque?! Next time I could try and replicate some more classical painting type stills, with fruit and or flowers? Maybe that’s a little too cliche?

Well until next time……..happy snapping

12 replies to Tales from the Shoot – Still Life