This is a spot I went to the other weekend, just to round out my Lighthouses around Port Phillip Bay, not necessarily the prettiest spot, not the most historic, although it does have an interesting past I can remember from my childhood. 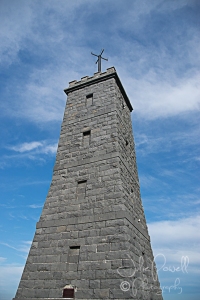 The original timber lighthouse was built in 1840, it was Victoria’s first beacon and is reported to be the earliest, if not the first Australian navigational aid. It was replaced in 1849 by the Bluestone tower, still standing today, built by James Linacre on Gellibrand Point. It is 27m Tall and has a signal range of 15nm. The second light operated until 1859 when it was replaced by a floating lightship anchored off the point in 4.5 fathoms of water. (Gellibrand Pile Light – more on this later). The tower was yet to become a lighthouse again in 1934, but not before it served in an interesting role as a time ball tower. As this place was the first permanent settlement is Victoria all survey were measured from the tide gauge at Gellibrand’s Point. In 1853, a Mr R. L. J. Ellery, the first Government Astronomer, commenced determining accurate local mean time, and established a time ball so that shipmasters to correct their chronometers “at the fall of the ball” at exactly one o’clock each day. The time ball was a large copper sphere mounted around a mast, and the flagstaff at the lighthouse was used to raise and lower the ball. It was later moved to the top of the new telegraph station nearby.

By 1934 the time ball had been removed. In this year the bluestone tower was extended by 30 feet with a circular brick tower on top. The extension was then painted with a coat of aluminium paint.This was the third lighthouse and operated from 1934 to 1987. It is believed the lighthouse was re-established due to the loss of singularity against the light of the City behind the Point Gellibrand Pile Light. It was electric, gave a green and red light and had a visibility of 15 nautical miles.

In 1854, ships captains had complained about the visibility of the time ball so the keeper at the lighthouse would darken the light at 2 minutes to 8pm then reignite the light at exactly 8pm to give the true time. After the discontinuing of the bluestone tower as a lighthouse the time ball mechanism was moved to the top of the tower around 1860. It is definitely known to have been operating there in 1861.

Between 1987 and 1989, the brick extension was demolished and a functional new replica time ball mechanism was reinstalled restored by the Point Gellibrand Rotary Club to commemorate the history of the site. This was officially opened in 1990. Under threat of subdivision and redevelopment the whole site was declared an historical site by the Premier, Steve Bracks, in 2000. The tower today is operated by a computer, which drops each day at 1pm as when it was in the 19th and early 20th centuries. [for more info]. 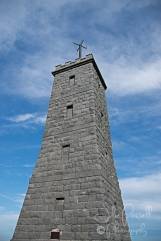 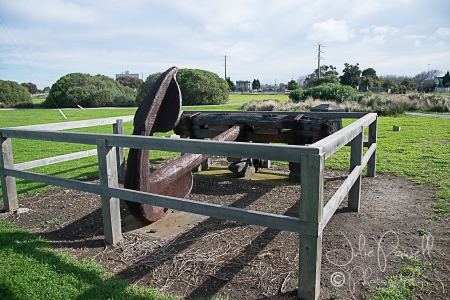 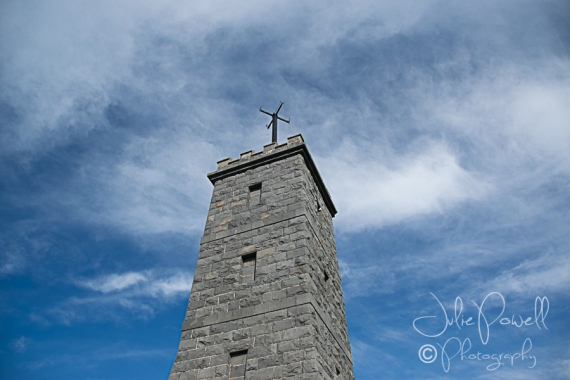 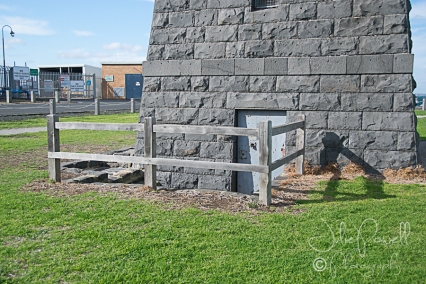 [Granted not a ship wreck as such, but it did involve a ship crash and subsequent destruction]. The first lightship to mark the reef off Gellibrand’s Point was the former barque New Constitution which the Government purchased in October 1856 for £1050. It took up station on 25 July 1859. In May 1860, tenders were called for construction of a new lightship off Gellibrand’s Point. The new lightship consisted of two white lights of equal height, 24 feet apart, and was shown from a temporary anchor in 4.5 fathoms of water. This lightship guarded Gellibrand’s Point reef from 1861 until 1895. This was replaced by a circular iron vessel 36 feet in diameter, painted red and surmounted by a round iron tower painted white showing a red light 38 feet above sea level that was used from 1895 to 1906. It was built using the centre column from the 1859 lightship. The arrangement was unsatisfactory as the vessel regularly broke its mooring by dragging chains and anchors.

Ports and Harbours decided to replace the vessel with a piled structure, so they took the vessel into dock and cut off the hull just below floor level then placed it on a barge. Meanwhile, a piled structure was being constructed in 32 feet of water out clear of the reef. It comprised 33 piles up to 70 feet long driven through the clay sea bed down to the basalt shelf. When the piles were driven, the barge was then floated out and the light was then placed back in position, but on top off the piles.

This was no mean feat as it was not placed at water level but higher up, some 23 feet above sea level, over the top of the new engine room that was on the first level of the platform. Thus the Port and Harbour Board had effectively recycled the old light vessel into a permanent structure, and the new ‘Gellibrand Pile Light’ commenced operating on 1 August 1906. However, when the piles were driven into the sea bed, they struck solid basalt at 9 feet, and the structure tended to move and sway a bit, so after two months 3000 tons of blue stone blocks were placed around the base of the piles to stabilize the light.

For the next 31 years the Gellibrand Pile Light performed her job of guarding the reef without any fuss. In late 1937, a cable 4200 feet long was laid on the seabed from Breakwater Pier to the Pile Light. This cable provided electricity and telephone to modernize the operations of a very important navigation beacon. The flashing light was then changed to electrical operation on 17 February 1938. A very strong fog horn which could be heard 6 miles away operated in foggy weather. The light was manned throughout its 70-year life, with one long occupancy being the Taylor family – Bill, his wife and two children, June and Max, from 1934 to 1951. 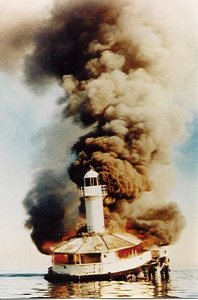 Unfortunately, on the foggy morning of 21 June 1976, the fog horn was not operating, and the pile light was hit by the Melbourne Trader, a vessel of 7,000 tonnes. The force of the collision snapped the piles at waterline area, the light was sheared off its piles at water level, pushed 7 metres (20 feet) sideways, and was left hanging precariously on several of the remaining piles.

The engine room and lower deck were submerged and the house and light tower were balanced on a knife edge, threatening to topple over into deep water. At the time the piles were 70 years old and their diameter had diminished from 2 feet to about 9 inches in the tidal zone thus reducing the strength of the piles. The sheer weight of the large vessel, which only just clipped the light, was surmount to a large steam locomotive hitting a car on a level crossing.

The harbour master of the day was not prepared to risk any of his men to secure or repair the structure, as it was considered to be on the brink of tumbling into the sea, so reluctantly Ports & Harbours gave the order to set fire to it at 11 am on 23 June 1976. Just before the fire was lit, the lantern and dome of the light were salvaged, and were later set up in the maritime museum complex alongside the barque Polly Woodside in the old Duke and Orr’s Drydock at South Wharf in the River Yarra, upstream of the Johnson Street Bridge (now re-named the Grimes Bridge). The lantern room is original with new glazing bars, but the cylinder that supported the lantern is a replica made up by Ports and Harbours, as the original was badly bent in the fire. Today an insignificant steel pile with a solar panel on top provides a light to mark the end of Gellibrand’s Point reef, unfortunately it has not the grandeur of its predecessor. [Info & images  courtesy of www.lighthouses.org.au].

I remember seeing footage of the burning pile light on the news, and the smoke could be seen miles away. When we were at Gellibrand Point, I could not see anything, I perhaps need a bigger lens?

Well that is it for my Lighthouses in the Bay of Port Phillip and Western Port Bay, I hope you have enjoyed traveling with us. I hope during the warmer weather can visit with some more along The Great Ocean Rd and Otway Ranges.