Last week we did a Cover Make Over for the cult classic American beauty, love it or hate it, I think we all did our own version of ‘American Beauty’.

Trev from Silly Old Sod, decided to do a take on the film title as opposed to the actual cover, and I applaud him for that, just brilliant!

Anyway, I decided to make my cover on the first thing that came into my head as opposed to the storyline of the film. I chose an Oldsmobile car as to me, it’s an American beauty. The background is a silhouette of the New York skyline and I’ve added some simple clouds, some highlights to the cars headlights and the American flag. That’s about it. I hope you like it.

Sarah from First Night Designs, took an interesting approach to this cover and decided to focus on actor Kevin Spacey and not the Rose. I think the placement of the people, almost out of shot, it adds a sens of drama and the fonts are wonderful.

I knew I wanted to avoid a rose but what was my main focus going to be? I decided it was people so I swiped a slice from Tallulah Bankhead, a profile shot of Spacey from Wikipedia and set to work, the idea being that Spacey’s character is yearning for the out-of-reach schoolgirl (alright, so Bankhead was not a schoolgirl even when she was a schoolgirl). If knowing it’s Bankhead disturbs you, imagine she’s Spacey’s wife, Bening!

To be frank, I’m not enamoured of my treatment but — as so often — time was running out and I didn’t want to miss out, especially as I probably won’t be able to take part next week. Fonts used were Skia Regular for Sam Mendes, Bening and Spacey, Times New Roman for ‘American’ and Zapfino Regular for ‘Beauty’. 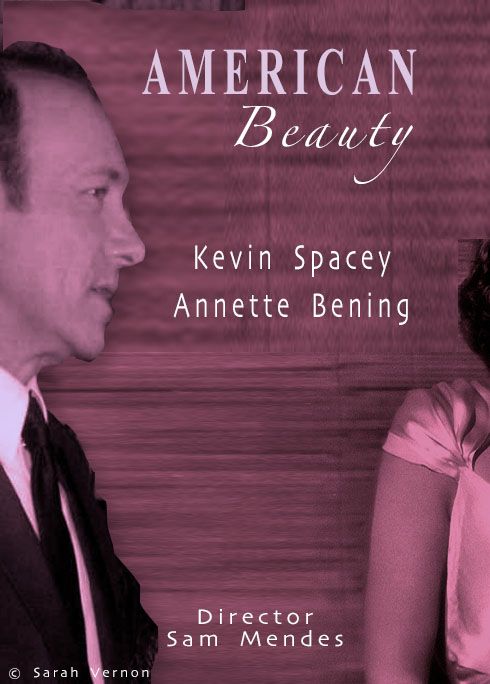 This is my version, although Jema is technically an Australian Beauty! Ran this image through a pencil sketch filter and added the rose and subtle colouring.

2 replies to Cover Make Over – Wrap Up