The Moon is coming the Moon is coming……..sounds a little like Chicken Little and The Sky is falling, The Sky is falling; doesn’t it. There was a lot of hype over this particular Super Moon, but it really was not all that spectacular. If you read this post by Gary Hart, he explains it all quite well, he also has some magnificent photos. I on the other hand got nothing!

Melbourne put on it’s usual charm for a celestial event and had complete cloud cover 😦 . We all shuffled off to various spots around Melbourne, but did not get much at all. I did manage to get some lovely shots of the City Skyline (the plan was to get shots of the city in silhouette as the Super Moon rose above it). All I got was a Super Cargo Ship, Super Clouds (there was a glow through the cloud). Oh and I briefly saw the moon through a break in the clouds on the way home, honestly it really didn’t look that big?????????? 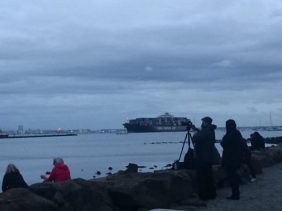 Even The Age newspaper took a few shots of my group (I’m am just out of shot) and called it a #SuperFizzer. Moth was asked to comment for the paper and they took his name and number, I doubt that they called this morning for an update and photos hahahahaha! Poor Hubby his first 5 minutes of fame and he got nothing. Oh well there is still another 2 nights to grab something (maybe) and then there is always next month, it will only be slightly smaller.

Til next time, happy snapping and good luck with your moon pics….