I recently spent an afternoon in the studio with Desley from Musings of a frequently flying scientist, I had several really cool and novel and even a little bit sciencey (Is that a real word?) – well for me and my child level science ability lol.

Two you have already seen, Fruit with cream, dark & light comparison, also the Icy Poles. This post is Skittles and hot water. I have seen this on YouTube and let me tell you, ours did not all appear as streaks of colour. Perhaps it is the angle of the floor, the plate, the side of the plate, the temperature of the water? I have no idea.

So that is the behind the scenes shot, from my phone, we had our cameras set up on either side of the white perspex on the floor (I am camera left and Desley on the right) and shot flat lay style on burst mode, using natural light and a reflector. I only bought one small box of Skittles, so we only got one shot at this. Desley went to work with her macro lens, once this was finished. Anyway here are my pretty pictures… 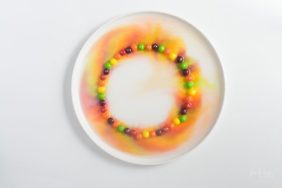 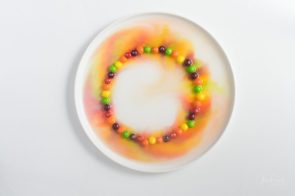 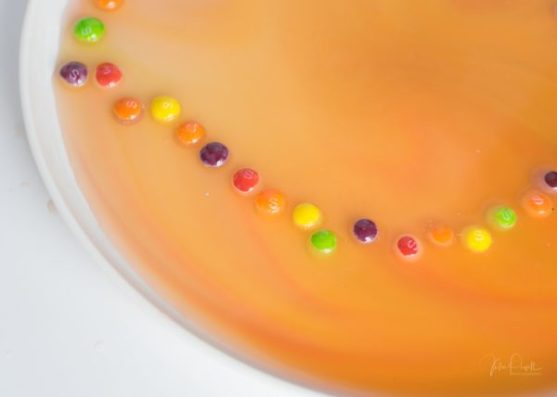 So how did we do it? Well, we just bought a small box of Skittle and arranged them on a large white plate around a smaller bowl (to create a nice circle), arranged colours as desired and then removed the bowl. This was all done on a large sheet of white perspex on the floor. I then poured boiling water from the kettle into the middle of the plate until it reached the skittles and slowly melted them, releasing a rainbow of colour.

13 replies to In The Studio with Skittles