A change of pace from some Silo Art for today. Several months ago, we were invited to attend an evening of Light Painting with a different photography group (than we usually do things with). The day had been fairly cold, and wet and stormy, thankfully it cleared up late in the afternoon. We still had the cold, but only a few spots of rain.

We drove out to Lilydale Lake, we have not been here before, such a pretty spot, it would be a fabulous place for the dogs too, as there is a really gentle sloping beach to the water. 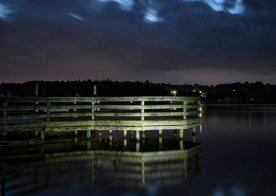 We had the usually flaming steel wool, always a crowd-pleaser, but a few twists on that, coloured lights in the middle, but he also had lots of cool toys. Sadly we did not get to play with as many as we hoped, but it was still fun. Eventually, we left near midnight and we had a long drive home, with an early start.

Sadly, this night I had been experiencing some technical difficulties with focusing and such and just assumed it was me and my camera playing up a bit (which has been doing on and off again for a while), so the images are not as well focused as I had hoped. The next day my camera started behaving VERY erratically and by lunchtime was pretty much useless. I had been saving up for a new camera for a few months, just meant I was buying one a little earlier than expected.