What can start as a spark of an idea can literally burn bright with passion, as was the case with the shoot. Two models, plus me and a Hair and Makeup artist, all who work at least part-time, plus family etc, trying to find a time that suited us all was difficult, so we ended up with a Wednesday afternoon/evening shoot, something I generally wouldn’t do.

Jess met at Ally’s house in the afternoon for Hair and Makeup there, then both drove to my studio and met with Dragon for further hair and makeup. I worked with Jess in the studio for her single shots and then Dragon and then both together.

Our theme was a Victorian Vampire Couple, I was channelling Bram Stoker’s Dracula, everything was dark and moody, Dragon had the most amazing collection of Victorian, Gothic clothes and Jess had a few corsets which we put with a Victorian bustle and tulle skirt I had created. I even had a coffin! It was actually a display stand for an alcohol brand, which required a bit of Photoshop to cover up, it was also a little small, so we had to cut the bottom off so Jess and Dragon could stick their feet out – very funny.

Dragon and Jess had never met before, but clicked really well and did an amazing job of being quite intimate. Actually, there was loads of laughs and giggles…kind of hard not to laugh when you see someone quite tall or with full bustle skirt trying to climb into a cardboard coffin! I also had some fun with smoke and mirrors, I had bought this ornate looking mirror recently and am loving using it in shots, so cool. 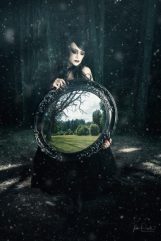 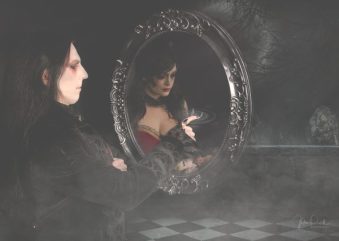 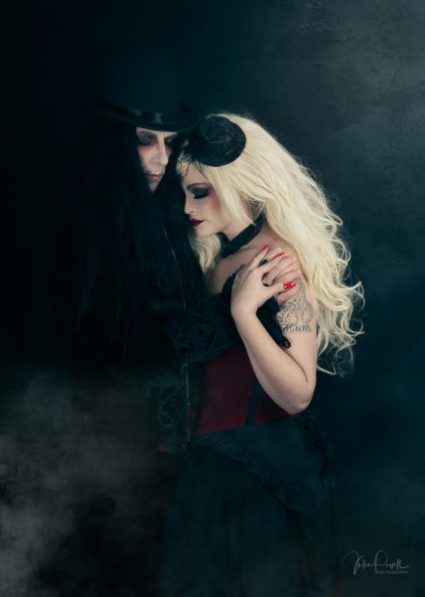 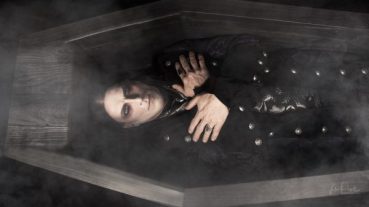 Now Dragon Night (I swear it is his real name), is a model; life model, fetish, Goth, Steam Punk, Nude, creative. He is also a Male escort, a Stripper (Melbourne’s only Gothic Stripper!), he is also a DJ, he looks intense in his platform boots and scowl, but was a really nice guy, quite helpful. I do hope to use him again, perhaps some Steam Punk?

P.S. I have had a few requests from my Facebook page to run a workshop based on this series, so after chatting with the gang…yes! We are doing it all again in October – for Halloween! Yay!

7 replies to In the Studio – Dark Romance